Neurodiversity refers to a group of people who have neurological differences such as autism, ADHD. and dyslexia.  Put simply, people who are neurodiverse think differently — and that’s a good thing! We need a diverse workforce with special talents and thought processes to help us solve future problems and progress humanity.

The only problem? Many neurodivergent job seekers can’t make it past the interview stage in order to launch their careers. For instance, young professionals with autism often struggle to make eye contact, while those with ADHD are prone to fidgeting. Both of these habits can tank a traditional interview — and, ultimately, destroy an applicant’s shot at landing a good-paying job. 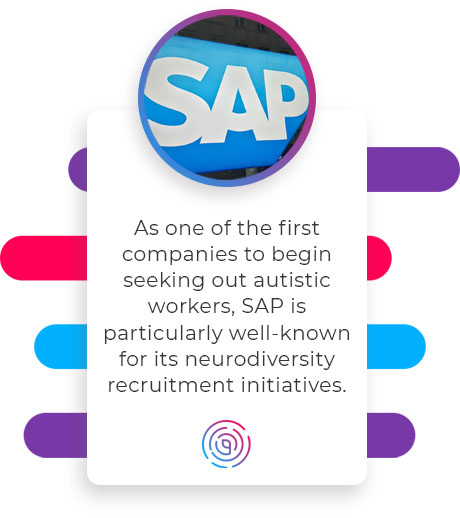 Fortunately, many employers now have neurodiversity recruitment programs in place to help tap into the dazzling talents of neurodivergent job seekers. Here’s a look at a few of the companies and organizations that are actively recruiting neurodiverse talent and setting them up for career success.

SAP is particularly well-known for its neurodiversity recruitment initiatives, and for good reason. As one of the first companies to begin seeking out autistic workers, the German IT and software corporation had a huge lead over everyone else. The corporation’s Autism at Work program was started in 2013 and aims to not only hire neurodiverse candidates, but also create a more welcoming workplace for them. Their efforts are clearly paying off. The company says that it has a 90 percent retention rate of employees on the autism spectrum.

After SAP’s successful recruitment of neurodiverse talent, it wasn’t long before Microsoft followed suit. To increase diversity at Microsoft, the tech giant launched its Autism Program to recruit and onboard individuals on the autism spectrum.

Microsoft has also made things easier for employees with dyslexia — a language-based learning disability that is believed to affect five to 10 percent of the population — by providing them with assistive technologies to help even the playing field. In 2018, it became the first company to sign the “Made by Dyslexia” pledge to support people with dyslexic thinking.

The interview process is stressful for anyone, but it can be particularly challenging for those with ADHD, Tourette Syndrome, and other neurological disorders. That’s why investment bank J.P. Morgan is rethinking the traditional job interview. The company recently rolled out a series of pymetrics games to better match job candidates with the right job fit.

The investment bank also launched an Autism at Work program in 2015, and the results have been nothing short of dramatic. According to the company, autistic employees are 48 percent faster and up to 92 percent more productive than their non-autistic peers.

Looking for career opportunities in information tech (IT)? Hewlett Packard (HP) is one of the companies that is spearheading the DXC Dandelion Program, an initiative designed to recruit people on the autism spectrum and prepare them for a successful career in IT. The company also has a buddy system in which employees — who have gone through autism awareness training — help with the onboarding process. 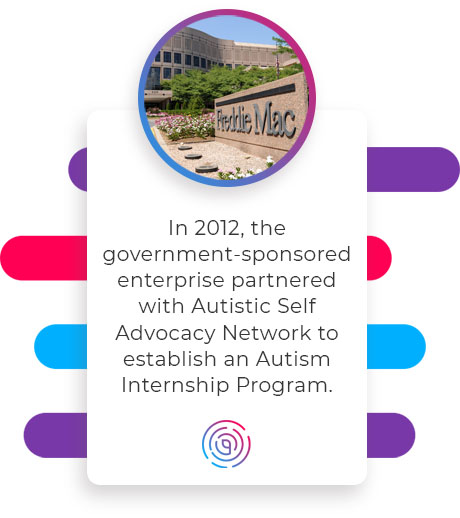 Freddie Mac is another early pioneer of supporting neurodiversity in the workplace. In 2012, the government-sponsored enterprise partnered with Autistic Self Advocacy Network to establish an Autism Internship Program to match the unique talents of autistic individuals with Freddie Mac’s business needs. The mortgage finance company is also known for providing quiet spaces, light dimmers, and noise cancellation headphones to accommodate neurodiverse employees and create an optimal work environment.

It’s no secret that some individuals with autism have extraordinary talent in math, art, music, analytics, and language. Ernest & Young (EY), a Big Four service firm, aims to unlock that potential with their neurodiversity recruitment strategies.

In 2016, the company launched a neurodiversity program, which includes a customized onboarding process and assigning trained office buddies to support new hires. Another cool thing about EY? They collaborate with SAP, Microsoft, and other companies to open more doors for neurodiverse candidates.

Neurodiversity isn’t something that should be “cured” or shunned. It should be accommodated, particularly in the workplace. If you’re a neurodiverse individual, don’t give up your job search! Check out the neurodiversity recruitment programs at these companies and let the world know about your dazzling array of talents.