See what's happening at Tallo and get involved! View upcoming events.
Support Log In
Do Interns Get Paid?
Skip to content
Back to Blog

These days, internships are all but required to launch a successful career. The reality is that many employers prefer job candidates who have experience under their belt before they graduate from college.

Of course, you probably know this, which is why you’ve been busy searching for internships that will give you the professional experience you need to land your first job after graduation. But while browsing internship listings, you may have come across a few that said they were “unpaid.”

Um, say what now? Are unpaid internships even legal?

Well, it can be a little complicated. Read on to learn more about paid vs. unpaid internships, along with the benefits and drawbacks of both.

Do Interns Get Paid? Not Always.

First, some good news: The majority of internships offer some form of compensation, whether it’s an hourly wage, academic credit, or stipends to help cover living costs. In fact, due to U.S. Department of Labor (DOL) laws, it can be pretty difficult for companies to get away with offering their interns zero compensation.

Difficult, yes. But, unfortunately, not impossible.

Under the Fair Labor Standards Act (FLSA), employees must be paid at least minimum wage for their work. The only problem? Interns aren’t considered employees under the FLSA.

That means that, yes, unpaid internships are legal, so long as the intern is the “primary beneficiary” of the agreement. This is determined by the DOL’s “Primary Beneficiary Test,” a seven-factor test that takes into account things like the duration of the internship. For example, externships — which typically only last a few days — are generally more likely to be unpaid opportunities due to their shorter duration.

When it comes to summer internships for high school students, the legal waters are even more muddied. If you’re under the age of 18, employers must be extra careful not to violate Child Labor Rules.

OK, so asking this question is a lot like asking people how they felt about the final season of Game of Thrones. Depending on who you ask, you 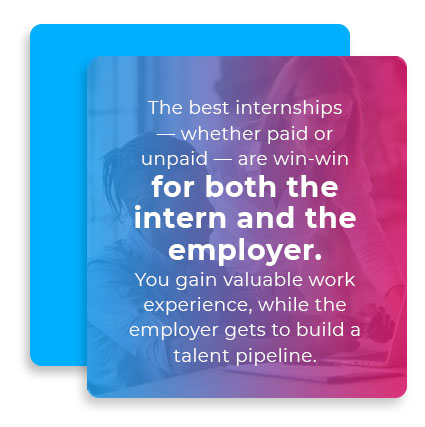 could get some surprisingly strong opinions on the topic.

The best internships — whether paid or unpaid — are win-win for both the intern and the employer. You, the intern, get to gain valuable work experience that can potentially help you map out a successful career path, while the employer gets to build a talent pipeline and scale their company with entry-level talent.

However, there are a few important differences between paid vs. unpaid internships that you should know about before you accept an internship.

Related: How to Find an Internship in College

Are unpaid internships worth it? We can’t say for certain because, frankly, it depends on the particular needs of the student and the opportunity in question. If you’re in high school and need to step up your resume game, accepting an unpaid internship could give you a major edge in the competition for paid internship opportunities later. Think it over carefully, consider your career path, and accept the offer that makes the most sense for you.