Applying early decision (ED) is a straight up power move. By applying this way, you’re signing a binding contract that says you will attend that school if accepted — period, end of story, no take-backsies.

Since it’s such a big commitment, you want to be extra sure about attending your first-choice school. Below, we’ll briefly explain what applying early decision means and provide a list of the best early decision colleges.

What Is Early Decision?

Early decision is a binding application plan for students who have a clear preference for a particular school. If you’re accepted through early decision, you must agree to withdraw applications previously submitted to other schools.

Unlike early action plans, you can only apply to one school through early decision. Usually, ED applications are due at the beginning of November, with results expected sometime in December or January.

Related: How Many Colleges Should I Apply to?

What Are the Advantages of Applying Early Decision?

There are several advantages to applying early decision. First, it cuts down on admissions-related stress by letting you know where you stand with your dream school early. Moreover, knocking out applications sooner rather than later gives you more time to apply for college scholarships, hang out with your friends, and live your best life.

But perhaps the biggest benefit of applying ED is that it can increase your chances of acceptance. Applying ED sends a strong message to college admissions officers that you are highly enthusiastic (read: lowkey obsessed) with attending that particular school. Demonstrated interest is something that some colleges look for in a successful applicant, which is one reason why ED applicants tend to enjoy higher admit rates compared to regular decision applicants.

Related: What Do Colleges Look for?

What Are the Disadvantages of Applying Early

Applying ED can be a bit of a gamble for some students. For one thing, it locks you into a school approximately 10 months before the school year starts, giving you lots of time to second-guess your decision to attend that particular school.

Potentially more problematic, though, is the financial aid factor. In recent years, applying ED has come under fire for primarily benefiting privileged students who don’t need to worry about the financial implications of applying ED.

If you’re accepted through ED, be aware that you will not have the opportunity to compare financial aid packages from other schools. Additionally, most colleges require accepted ED students to put down a non-refundable deposit upfront. 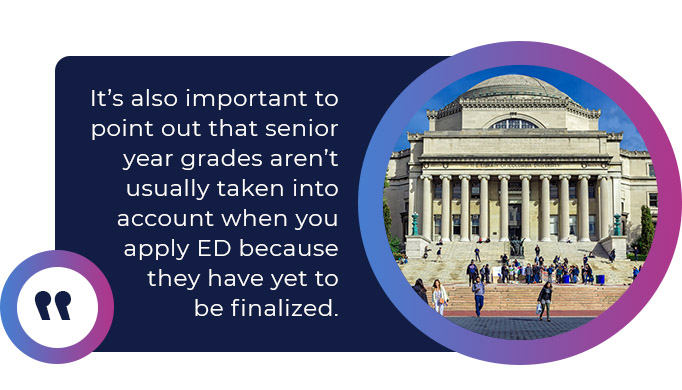 It’s also important to point out that senior year grades aren’t usually taken into account when you apply ED because they have yet to be finalized. If your grades are well beyond the college GPA requirements, this probably isn’t a big deal. But if you’re counting on your senior year grades to boost your GPA, you may be better off waiting to apply regular decision.

Whether you have a particular school in mind or you’re still making a college shortlist, here are 15 of the most popular early decision colleges.*

Some schools now offer an application option called “Early Decision II,” or ED II. The name is a bit confusing because you don’t actually submit an application early when you apply ED II. It’s basically a binding contract for the regular admissions cycle. 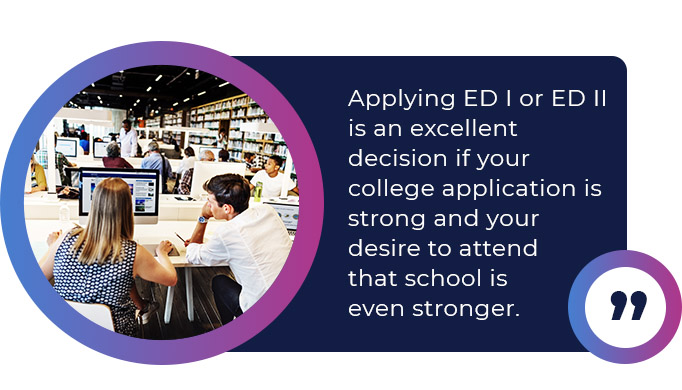 Submitting a Strong Application Is Your First Priority

Applying ED I or ED II is an excellent decision if your college application is strong and your desire to attend that school is even stronger. If you have to rush your application to meet the early deadline or you aren’t 100 percent sure that the school is for you, press pause for a second. Think through all your options carefully, choose the application plan that makes the most sense, and you’ll end up where you need to be in the end.

GET STARTED WITH TALLO