See what's happening at Tallo and get involved! View upcoming events.
Support Log In
Pre Reqs for College – Everything You Need to Know
Skip to content
Back to Blog

You know that you want to go college. Perhaps you even know what you want to study once you’re there. But if you want to succeed in your college-level courses, now is the time to start thinking about pre reqs. What are pre reqs and why should you care? Tallo is here to explain everything you need to know about college prerequisites.

What Is a Prerequisite?

Prerequisites, or pre reqs for short, are specific courses or subjects that you need to take (and get a passing grade in) before you can take higher-level courses in that same subject. At the undergraduate level, these courses typically come in 100-, 200-, 300-, or 400-levels, with the higher levels indicating more advanced courses.

Pre reqs were designed as part of the building block system, meaning that higher level courses should build upon the knowledge that was established in lower level courses. For example, your college degree might require you to take Calculus I as a freshman before you take Calculus II as a sophomore.

Why Are Pre Reqs Important?

For incoming college freshmen, pre reqs might seem like nothing more than annoying hoops to jump through to earn a degree. But in reality, they serve an important purpose, which is to prevent undergraduates from enrolling in courses that they’re not prepared to take. 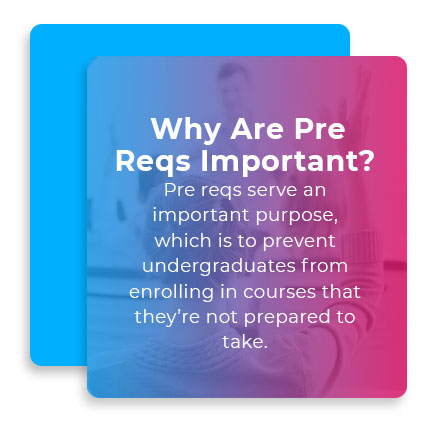 You may be wondering: What’s the harm in taking pre reqs that you may not be ready for? For one thing, you could get poor grades that end up tanking your GPA (and your college scholarship opportunities along with it). It’s also unfair to upper level college students who want their professor to skip the basics that they learned a long time ago.

If you truly feel that you’re ready for an upper level course and have the ability to prove it, meet with your advisor. You may be able to take a CLEP exam to earn college credit for the things you already know and effectively waive some pre req requirements in the process.

What Pre Reqs Do You Need for College?

Recommended Reading: What Is a Liberal Arts College?

Also, keep in mind that traditional four-year bachelor’s programs don’t always start at the freshman level. For instance, some colleges and universities have upper-division-only nursing programs that require you to earn your associate degree before you can continue your education.

Interested in getting your associate degree? Read our blog,”What Is an Associate Degree?,” to learn more.

What Pre Reqs Should You Take in High School?

Even though pre reqs and admission requirements may vary from school to school, most colleges and universities want students to complete a standard core curriculum. To give you an idea, here is what a standard high school curriculum generally looks like:

If you already know what you want to major in after high school (or have a vague idea), it’s a good idea to take classes that will help prepare you for college coursework. For example, students preparing for an undergraduate degree in microbiology might want to take courses that give them a solid chemistry background, whereas students in the liberal arts would be better off taking a wide range of intro-level courses in the humanities. 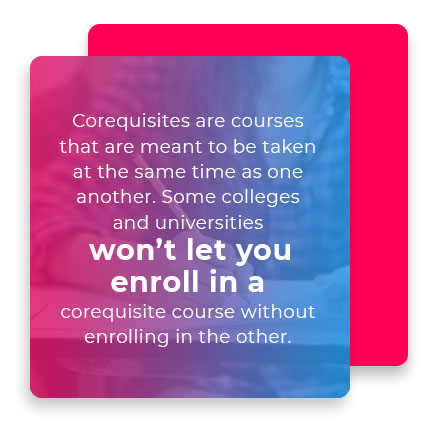 Corequisites vs. Prerequisites – What’s the Difference?

When looking at your chosen college’s course requirements, you may see mention of corequisite courses. Corequisites are courses that are meant to be taken at the same time as one another. Some colleges and universities won’t let you enroll in a corequisite course without enrolling in the other.

Talk with Your Advisor

Pre reqs aren’t that difficult to understand, especially once you know what you want to study at college. But if you have questions about your college courses or run into a unique problem, don’t hesitate to reach out to your academic advisor. They can help you choose the right college courses for each semester and put you on the fast-track to career success.

Interested in talking about pre requisites with other high school students? Join Tallo Community and chime in today!