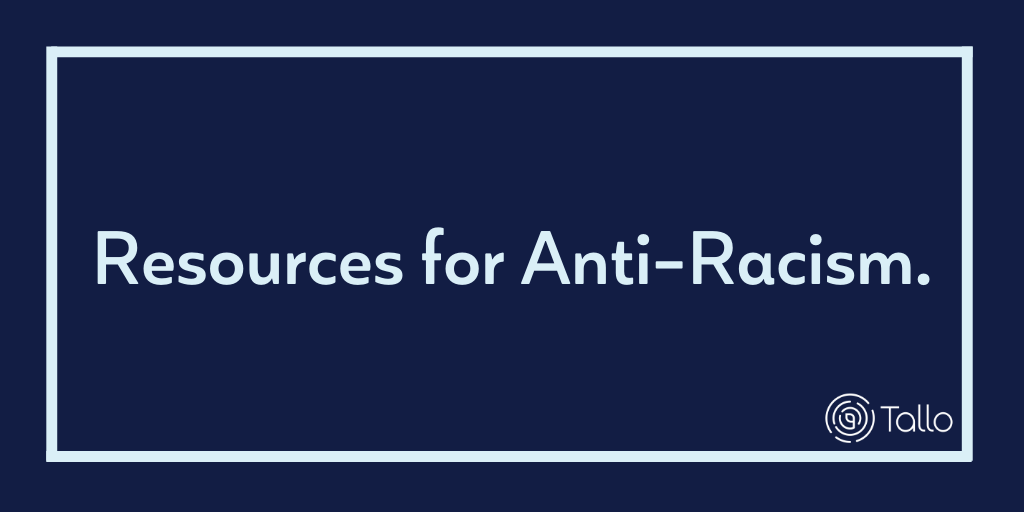 Tallo is committed to building a more just, equitable, and anti-racist world. Your future matters. Your voice matters. Your life matters. You are powerful, and we stand with you. Racial injustice is a shared problem, we must be part of the shared solution. As we work together to create more equitable experiences for the Black community, the Tallo Team has compiled this list of books, podcasts, tv shows, and movies. Some of them discuss racial injustice, and all of them feature strong Black narratives.

As we continue to mourn the lives of George Floyd, Ahmaud Arbery, Breonna Taylor, and countless others, please find a list of mental health resources at the bottom of this post.

Do you have other resources to share, or ideas for what Tallo can help provide? Send us a message at @AppTallo on Instagram.

After graduating from Harvard, Bryan Stevenson heads to Alabama to defend those wrongly condemned or those not afforded proper representation. One of his first cases is that of Walter McMillian, who is sentenced to die in 1987 for the murder of an 18-year-old girl, despite evidence proving his innocence.

The Hate U Give

Starr Carter is constantly switching between two worlds — the poor, mostly black neighborhood where she lives and the wealthy, mostly white prep school that she attends. The uneasy balance between these worlds is soon shattered when she witnesses the fatal shooting of her childhood best friend at the hands of a police officer.

Filmmaker Ava DuVernay explores the history of racial inequality in the United States, focusing on the fact that the nation’s prisons are disproportionately filled with African-Americans.

When They See Us

In 1989 a jogger was assaulted and raped in New York’s Central Park, and five young people were subsequently charged with the crime. The quintet, labeled the Central Park Five, maintained its innocence and spent years fighting the convictions, hoping to be exonerated.

Former first lady Michelle Obama discusses her life, hopes, and connections with others.

Although the Civil Rights Act of 1964 legally desegregated the South, discrimination was still rampant in certain areas, making it very difficult for blacks to register to vote. In 1965, an Alabama city became the battleground in the fight for suffrage. Despite violent opposition, Dr. Martin Luther King Jr. (David Oyelowo) and his followers pressed forward on an epic march from Selma to Montgomery, and their efforts culminated in President Lyndon Johnson signing the Voting Rights Act of 1965.

I Am Not Your Negro

In 1979, James Baldwin wrote a letter to his literary agent describing his next project, “Remember This House.” The book was to be a revolutionary, personal account of the lives and assassinations of three of his close friends: Medgar Evers, Malcolm X and Martin Luther King, Jr.

Taking place mostly in rural Georgia, the story focuses on the life of African-American women in the Southern United States in the 1930s, addressing numerous issues including their exceedingly low position in American social culture.

This Netflix-original series follows a group of students of color at Winchester University, a predominantly white Ivy League college. The students are faced with a landscape of cultural bias, social injustice, misguided activism, and slippery politics.

Dre Johnson (Anthony Anderson) has it all – a great job, beautiful wife Rainbow (Tracee Ellis Ross), four kids and a big home in a classy neighbourhood – but as a black man, he begins to question whether all his success has brought too much cultural assimilation for his family.

In February 1965, Malcolm X is murdered; three men are arrested, but only one admits to being part of the plot; decades later, one activist pledges to find the real killers, and vows to learn the truth about what officials knew regarding the crime.

When filmmaker Yance Ford investigates the 1992 murder of a young black man, it becomes an achingly personal journey since the victim, 24-year-old William Ford Jr., was the filmmaker’s brother.

When 15-year-old black cyclist Brenton Butler dies in a hit-and-run accident — with a white police officer behind the wheel of the vehicle — Jersey City explodes with racial tension.

Events of the past few years have turned a challenging spotlight on White people, and Whiteness, in the United States.

What’s CODE SWITCH? It’s the fearless conversations about race that you’ve been waiting for. Hosted by journalists of color, the podcast tackles the subject of race head-on.

Step inside the confession booth of Wesley Morris and Jenna Wortham, two culture writers for The New York Times. They devour TV, movies, art, music, and the internet to find the things that move them — to tears, awe, and anger. Still Processing is where they try to understand the pleasures and pathologies of America in 2020.

Yo, Is This Racist?

Every Wednesday, Ti, co-host Tawny Newsome, and their guests answer questions from fan-submitted voicemails and emails about whether or not something is, in fact, racist.

An audio series on how slavery has transformed America, connecting past and present through the oldest form of storytelling.

26 Mini-Films for Exploring Race, Bias, and Identity With Students

26 short New York Times documentaries that range in time from 1 to 7 minutes and tackle issues of race, bias, and identity.

Here’s a closer look at what systemic racism is, and how we can solve it.

The 1619 Project is an ongoing initiative from The New York Times Magazine that began in August 2019, the 400th anniversary of the beginning of American slavery. It aims to reframe the country’s history by placing the consequences of slavery and the contributions of black Americans at the very center of our national narrative.

Let’s Get to the Root of Racial Injustice: TED Talk

Megan Francis traces the root causes of our current racial climate to their core causes, debunking common misconceptions and calling out “fix-all” cures to a complex social problem.

What Beyoncé Taught Me About Racism: TED Talk

In this powerful TEDx Talk, diversity advocate and Beyoncé super fan Brittany Barron translates Beyoncé’s music as a road map about race relations in the United States; demonstrating that being “colorblind” is not the goal, but diminishing our nation’s “expertise” in racism is.

The Danger of Silence: TED Talk

A short, powerful piece from the heart, about finding the courage to speak up against ignorance and injustice.

Digital membership club designed for people of color to thrive.

How to support others during a mental health crisis.

Loveland Foundation is committed to showing up for communities of color in unique and powerful ways, with a particular focus on Black women and girls.