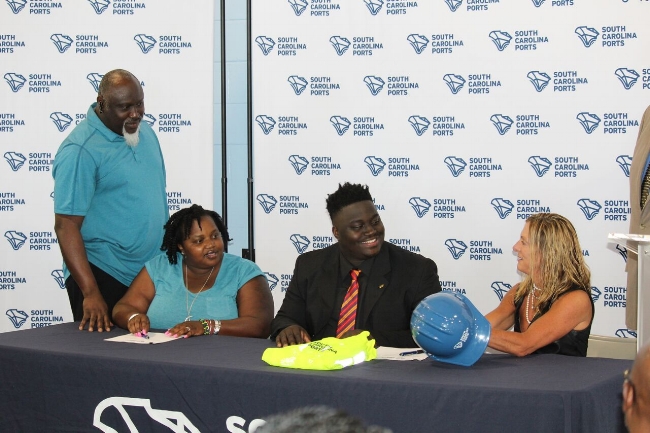 The ink had just begun to dry on Anthony Richburg Jr.’s letter of intent when he donned the Carolina blue helmet and gave the cameras a bright smile along with two excited thumbs up.

No, he hadn’t just signed to play for the UNC Tarheels; rather, the promising 18-year-old had chosen to begin his professional career with The South Carolina Ports Authority.

In its first-ever “Signing Day” on June 19, SPCA was proud to have landed the recent North Charleston High School graduate, a promising student they would have never found if not for his Tallo profile.

“We welcome Anthony Richburg to our team as the Port’s first hire from the Tallo partnership,” said SCPA president and CEO Jim Newsome, “and look forward to continuing to engage with local high schools on job opportunities at the Port and ways to prepare for a maritime industry career.”

The event was held – fittingly – at the The Union Pier Passenger Terminal in Downtown Charleston. Anthony was accompanied by his mother and stepfather as well as SPCA Vice President Barbara Melvin and Director Rusty Matthews, who made the decision to hire Anthony.

After initially discovering Anthony’s profile on Tallo, representatives from SPCA contacted him via the platform’s direct messaging tool. Through direct contact and networking opportunities facilitated with Tallo, SPCA and Anthony built a relationship which culminated in his signing day commitment in June.

Identifying and connecting with Anthony early on was vital in regards to his ultimate decision. That same type of engagement will be the future for SPCA’s recruitment efforts.

“The Ports Authority and greater maritime community employ more than 9,000 people locally, and we’re pleased to partner with Tallo to raise awareness of the Port among students in the Tri-County region as part of our recruitment strategy for the next generation of our workforce,” Newsome said.

“Partnering with proactive companies like SCPA,” says Tallo Co-Founder Casey Welch, “who understand and appreciate the importance of early engagement is vital in helping to identify, engage, and recruiting the future workforce while also retaining top talent from the Charleston area like Anthony.”