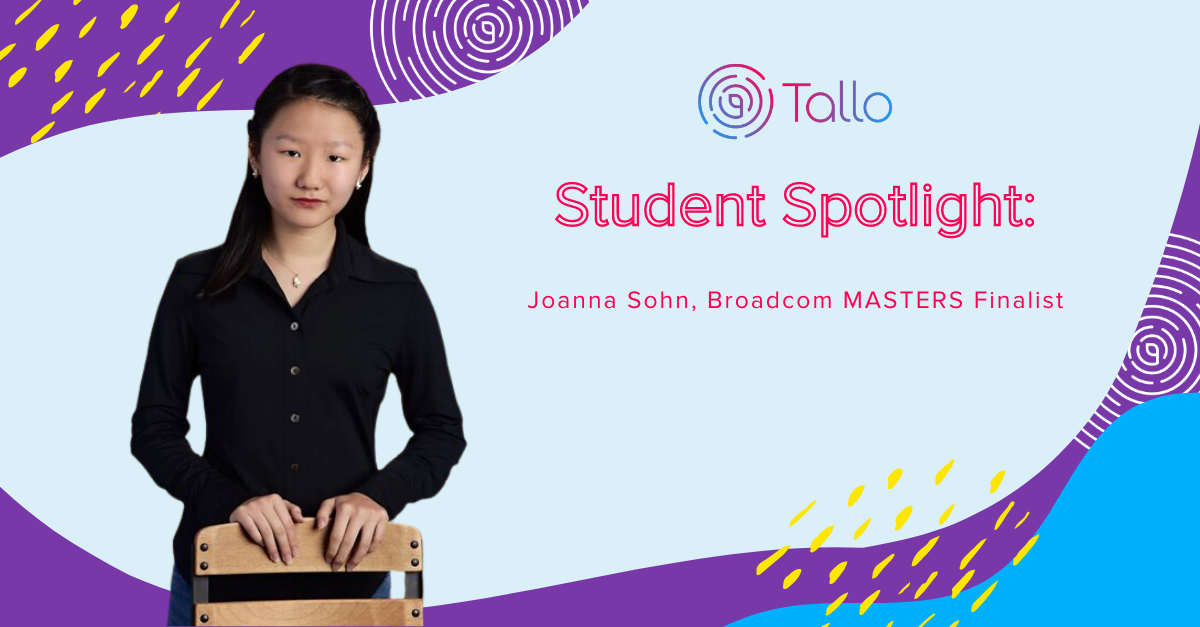 Say hello to Joanna! She is a Tallo user, an eighth-grader at Keystone School in San Antonio, Texas, and she was recently named one of the nation’s top STEM students when she became a finalist in the Broadcom MASTERS competition. As one of the thousands of students who participated in this year’s competition, she is proud to have been named a top 30 finalist!

Her project, “The Effect of Probiotics and Metformin on C. elegans after Treatment in a Hypoxia Chamber: Year II,” won her a place in the top 30 finalists for this year’s competition. When asked about what led her to choose this project, she says, “I originally chose this project because my mother has forced me to eat probiotics daily ever since I was young. I wanted to test if probiotics were truly beneficial for health. I chose hypoxia because I have a family history of ischemic heart disease, and it is a common cause of death. I thought it would be interesting to compare the effects of probiotics and a well-known medication, metformin.”

Joanna has been interested in STEM since early elementary school when she had the opportunity to be involved in a few dissections and museum trips. Since then, she has found more ways to get involved each year. She enjoys STEM because “…[it] is practically useful in real life in addition to being engaging and hands-on. I particularly enjoy science fairs because I can set up a hypothesis and design an experiment. It is exciting to overcome the obstacles and analyze results.”

In the future, she looks forward to studying subjects such as biology and medicine “because it explains the phenomenon in our lives and bodies.” She would also like to get more involved in computer science as she is in the process of learning how to program, and thinks that artificial intelligence is an aspect that will become increasingly useful in the future.

In her free time, Joanna enjoys playing the flute, crocheting, drawing, and reading. She is also involved in the student government at her school and is the treasurer of her class. She participates in quite a few clubs, and also volunteers to teach math club and promote coding for girls at her school. And how does Joanna utilize the Tallo platform?  “I use Tallo to keep track of and organize my accomplishments, clubs, and plans. I also check for opportunities and events that will be useful for my future.”

Tallo is proud to have you on our platform, Joanna! Great job on your project and congratulations on making it to the top 30 finalists of this year’s Broadcom MASTERS!

Students and other talent can get started on Tallo for free here!