See what's happening at Tallo and get involved! View upcoming events.
Support Log In
What is an Apprenticeship? All Your Questions Answered
Skip to content
Back to Blog

Go to college. Earn a degree. Get a job — preferably, in your field of study. That’s the career path that has been drilled into most of us from a young age. And to be clear, there’s nothing wrong with this path. But wouldn’t it be great if there were a way to skip the four-year degree and the mind-boggling debt that comes along with it?

There is! It’s called an apprenticeship, and it’s one of the best ways to learn in-demand skills and launch a successful career, all while getting paid. Sounds pretty amazing, right? If you want to learn more about apprenticeships, just sit tight. We’re going to tell you everything you need to know.

So, What Is an Apprenticeship?

You’ve probably heard of apprenticeships before. They’ve been around since at least the Middle Ages and have launched the careers of many famous faces, including Benjamin Franklin and Leonardo de Vinci. Even Elvis Presley — the King of Rock himself — was an electrician apprentice at one point!

Modern apprentices work much the same way as they did in the days of yore. You, the apprentice, will study under the guidance and tutelage of someone more experienced. You’ll get paid to learn highly technical skills that will boost your career prospects while your employer gets to make use of your ever-growing skillset. Think of it as a quid pro quo situation.

Wait, a minute. This sounds an awful lot like an internship, doesn’t it? You’re right! While both internships and apprenticeships involve on-the-job training, they have a few key differences:

Got it? Good. Now, let’s talk about why you’d want to consider an apprenticeship in the first place (in case that’s not already obvious ?).

The Benefits of Apprenticeship

How Much Does an Apprenticeship Pay?

Honestly, it depends on the industry and the position! 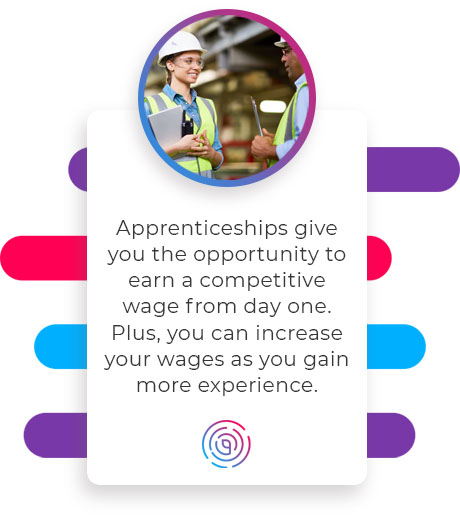 Historically, apprenticeships have been limited to blue collar jobs (think: plumbing apprenticeships and electrician apprenticeships). However, modern apprenticeship opportunities have extended beyond the skilled trades and can now be found in a variety of industries and sectors, ranging from tech and healthcare to education and art.

How Do I Become an Apprentice?

That’s where Tallo can help! Start by creating a Tallo profile, which will help get you noticed by businesses, schools, and organizations that are looking for young talent. We’ll connect you with apprenticeship opportunities and provide personalized career advice along the way.

Then, it’s simply a matter of securing an apprenticeship and putting in the hard work. After you complete the program, you can enjoy a stable career while earning a great wage, start a business with your technical skills, or further your education. The choice is up to you!