See what's happening at Tallo and get involved! View upcoming events.
Support Log In
Coding Bootcamp vs. College Degree (Pros and Cons of Each)
Skip to content
Back to Blog

As a digital native, you love the world of tech. You understand the importance of progressing technological advances that lead to world-changing innovations. You want to study computer science (CS) because it’s your passion. OK, and maybe because it’s an in-demand career that promises a steady income.

We’re not judging! With the insane cost of tuition these days, it would be silly not to at least consider that stuff before you take out a monster-sized loan for it.

Of course, a college degree isn’t the only way to pursue a career in computer science. There are also coding bootcamps, a relatively new training method that can potentially lead to well-paying IT jobs without degrees. But are coding bootcamps really worth pursuing? Or is a four-year degree still the way to go? Read on for an unbiased comparison of coding bootcamp vs. degrees.

Coding bootcamps are short and intensive programs that teach students programming skills that today’s employers are looking for. The first coding bootcamp appeared in 2011, and they’ve exploded in popularity ever since. 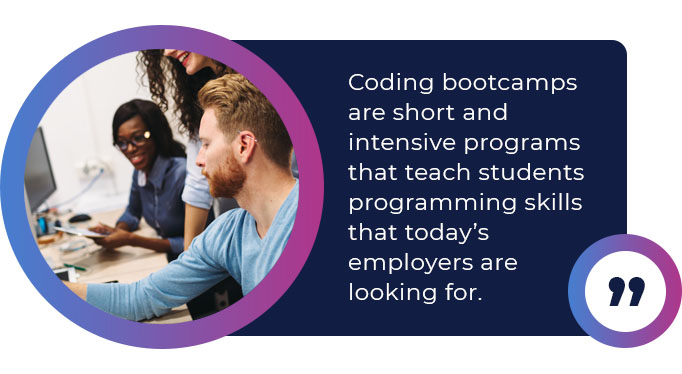 Thinking about getting a computer science degree? Honestly, it’s a pretty sound investment. According to the U.S. Bureau of Labor Statistics, the demand for computer and information technology (IT) occupations is expected to grow by 12 percent from 2018 to 2028. That’s faster than the average growth for all other occupations. 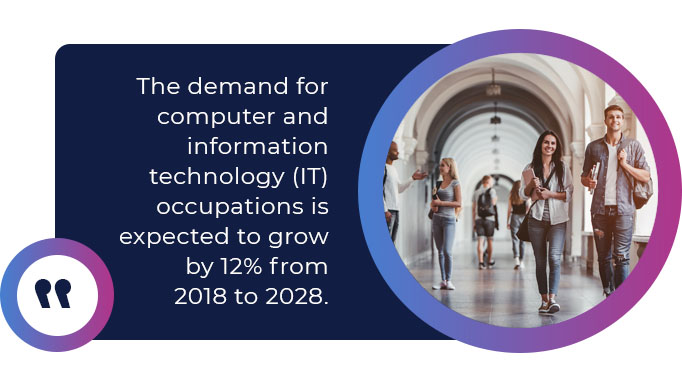 Coding Bootcamp vs. Degree – What Are Employers Looking for?

Ah, now for the all-important question: Do employers want someone with a four-year degree or coding bootcamp training?

While there will always be some employers who prefer to hire those with a four-year degree, the job outlook for coding bootcamp grads is positive. According to an Indeed survey, 72 percent of employers considered bootcamp graduates to be equally as prepared and just as likely to do well on the job compared to comp sci graduates.

Weighing All of Your Options

Another option worth considering are tech trade schools, which can potentially give you a shot at a high-paying tech job. Feel free to check out our blog to learn more about the difference between trade school vs. college.

The point is that there are plenty of career paths to become a programmer. Explore them all and find the career path that makes the most sense for your situation.