See what's happening at Tallo and get involved! View upcoming events.
Support Log In
Electrician Apprenticeships – How to Apply and What to Expect
Skip to content
Back to Blog

Thinking about pursuing a career as an electrician, are you? It’s not difficult to see the appeal. Licensed electricians get to work in an exciting and challenging field, solving electrical puzzles and earning massive respect for their in-demand skills, all while earning a great wage. Not to mention, it’s one of the best trade jobs you can land without a four-year degree. Woohoo, no student debt! *does happy dance*

Not sure where to look for apprenticeship opportunities or how to apply for one? The Tallo blog has you covered! Read on to learn how to score an electrician apprenticeship — plus, what you can expect on the job.

What Is an Electrician Apprenticeship?

Electrician apprenticeship programs can be broken down into basic two types: union and non-union shops. Neither is better than the other, necessarily, but your decision can alter your career path and earnings. 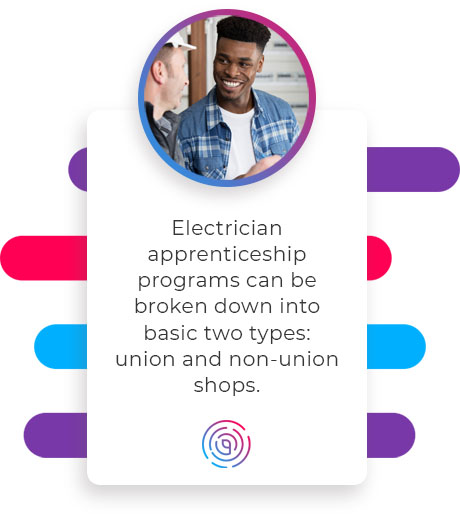 The entrance requirements to become an electrical apprentice for a union or to enter a trade school are generally the same:

If you’re applying for an IBEW apprenticeship, you’ll also need to prepare for the IBEW aptitude test. The scores of this test will determine the order in which you are interviewed.

FYI, you’ll definitely wanna brush up on your math, mechanical and reading comprehension skills for this — especially the math! The math questions you see in the booklet they send you are far easier than the ones on the actual test.

After you complete your aptitude test, you’ll wait to be notified and scheduled for an interview. Are you in a comfortable position? Good, because this step could take a while. Some apprenticeships accept a limited number of applications each year, which means you may need to wait a few months to get a call-back.

Once they call you, the process is a lot like any other job interview. You’ll be asked things like, “Why do you want to be part of our program?” and “Tell us about a time when you missed an important deadline” and other questions that low-key try to suss out your ability to do the job. 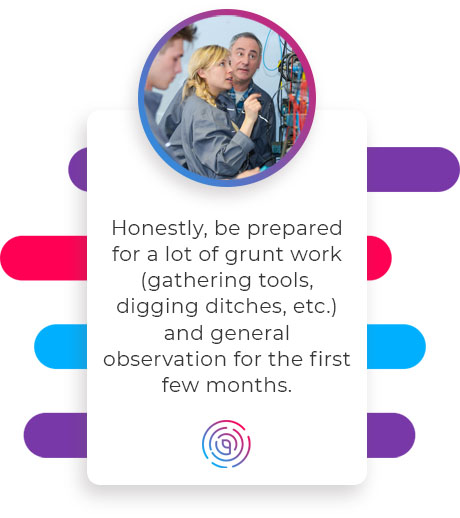 On-the-Job Training: What to Expect

OK, so you’ve landed the electrician apprenticeship — nice one! What can you expect from your on-the-job training?

Honestly, be prepared for a lot of grunt work (gathering tools, digging ditches, etc.) and general observation for the first few months. You’ll probably be sore AF in the beginning because — spoiler alert — being an electrician can be tough on the body.

As your program progresses, you’ll be given more challenging duties and responsibilities. Remember that it’s a learning experience. You’re going to make mistakes (and be yelled at for them). But if you ever feel unsafe doing something, tell your journeyman. Apart from that, a lot of an electrical apprenticeship is using common sense:

Working as an electrician apprentice is a rewarding but also challenging job. You’ll make mistakes, have orders barked at you, and feel out of your element. Keep asking questions, put in the hard work, and you’ll be well on your way to becoming a licensed journeyman.