See what's happening at Tallo and get involved! View upcoming events.
Support Log In
The New Era of Politics According to Gen Z - Tallo
Skip to content
Back to Blog 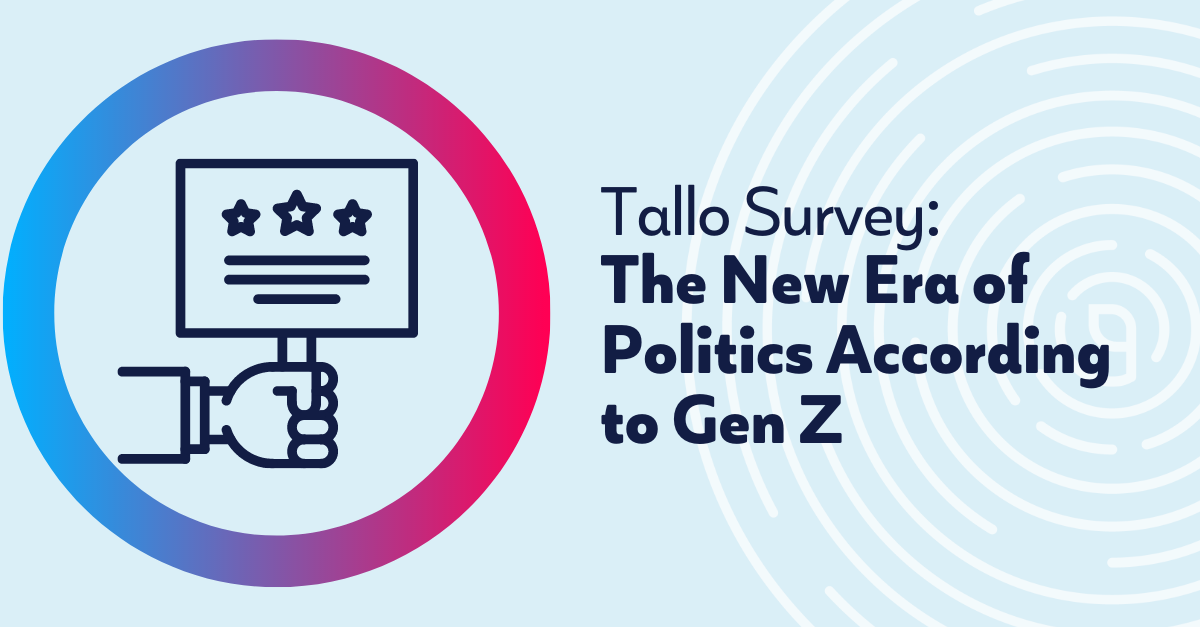 With many members of Gen Z voting in a presidential election for the first time this year, their perception of politics — and the election in general — matter now more than ever. Gen Z has a mind of their own when it comes to politics, and they’re continuing to distinguish themselves from the Millennial generation.

Gen Z is shaking things up completely with a different school of thought when it comes to politics. Unlike older generations, Gen Z has their own opinion on political party affiliation, the Administration’s policies, and even where they should get their news. We surveyed 3,375 Gen Zers to find out what they think about the election’s impact, voting, and what’s important to them and here’s what we learned.

This 2020 Presidential Election is a Big Deal for Gen Z, and They’re Bracing for Impact:

Gen Zers account for one-in-ten of the country’s eligible voters, and they’re taking that influence seriously. Members of this future generation expect this election to have a substantial impact on their lives. A whopping 70% said they believe the election will have an impact on their current or future career plans. Forty percent of Gen Z also feels that the election will cause friction in their social lives amongst their friends, family, and dating partner. This is especially relevant now, as 66% currently live at home with their parent(s)/guardian. The most significant relationship they fear will be impacted? Dating partner. Twelve percent would not date someone who votes for a different candidate.

Gen Z is Getting Involved and Sharing Opinions about Policies:

From the 3,375 Gen Zers who responded to this survey, 61% plan to vote, 33% do not plan to vote, and 6% are unsure if they’ll vote. Interestingly, a high percentage of Gen Zers (86%) did watch, or are planning on watching, the presidential debates. However, 81% reported that the debate didn’t change their minds about which candidate they plan to vote for.

When it comes to the policies that are important to young voters, Gen Zers have opinions that may differ from other, older voters. At the top of their list for the president’s priorities are: the COVID-19 outbreak, healthcare, and racial inequality. At the very bottom of their list are the federal budget deficit, foreign policy, and Supreme Court appointments.

According to our Gen Z respondents, while the majority are prepared to practice their right to vote, are staying informed, and have opinions about priority policies, one thing they’re not looking to commit to are party labels. While 55% of Gen Z respondents said that they plan on voting for Joe Biden, only 39% identify with the Democratic party. Fifteen percent stated that they will vote for Donald Trump and the same percentage identify with the Republican party. However, more than twice that amount (37%) reported no political affiliation.

Where Gen Z Gets Their News May Surprise You

Gen Z is the digital generation, but their primary source of information for the presidential election is news from cable or major networks. After that, both Instagram and written news publications were ranked equally as their second most-used source of election information. Staying on the social media trend, Twitter was ranked third, and TikTok (the newest social media giant to hit the scene) was ranked fourth. These sources all ranked higher than rallies/political events, radio programs, school organizations/clubs, and Facebook. While TikTok isn’t one of the top three sources of election information for Gen Z, it is interesting to note how quickly the platform has gained prominence — the app didn’t even exist during the last presidential election. This new data about Gen Z’s approach to media and news comes at the same time as TikTok and other social media platforms continue to navigate their role in content moderation and the spread of disinformation ahead of the election.

Gen Z should be a critical piece of every company’s recruiting plan. They are, after all, the future talent pipeline. We’ve mentioned before that corporate Diversity and Inclusion strategies, early-career networking, job stability, and a commitment to ethics are very important to Gen Z. As it turns out, promoting and encouraging the right to vote ranks very high on their list of future employer expectations as well: 85% believe it’s important that their future employer encourages employees to vote and facilitates opportunities (i.e. time off) in order for them to do so.

Interested in data that will help you better understand your future workforce? Tallo’s Perception Analysis provides insight into what is driving future talent so you can develop proactive engagement strategies and connect with Gen Z.  Contact us to learn more.