See what's happening at Tallo and get involved! View upcoming events.
Support Log In
Where do students want to live after graduation? - Tallo
Skip to content
Back to Blog 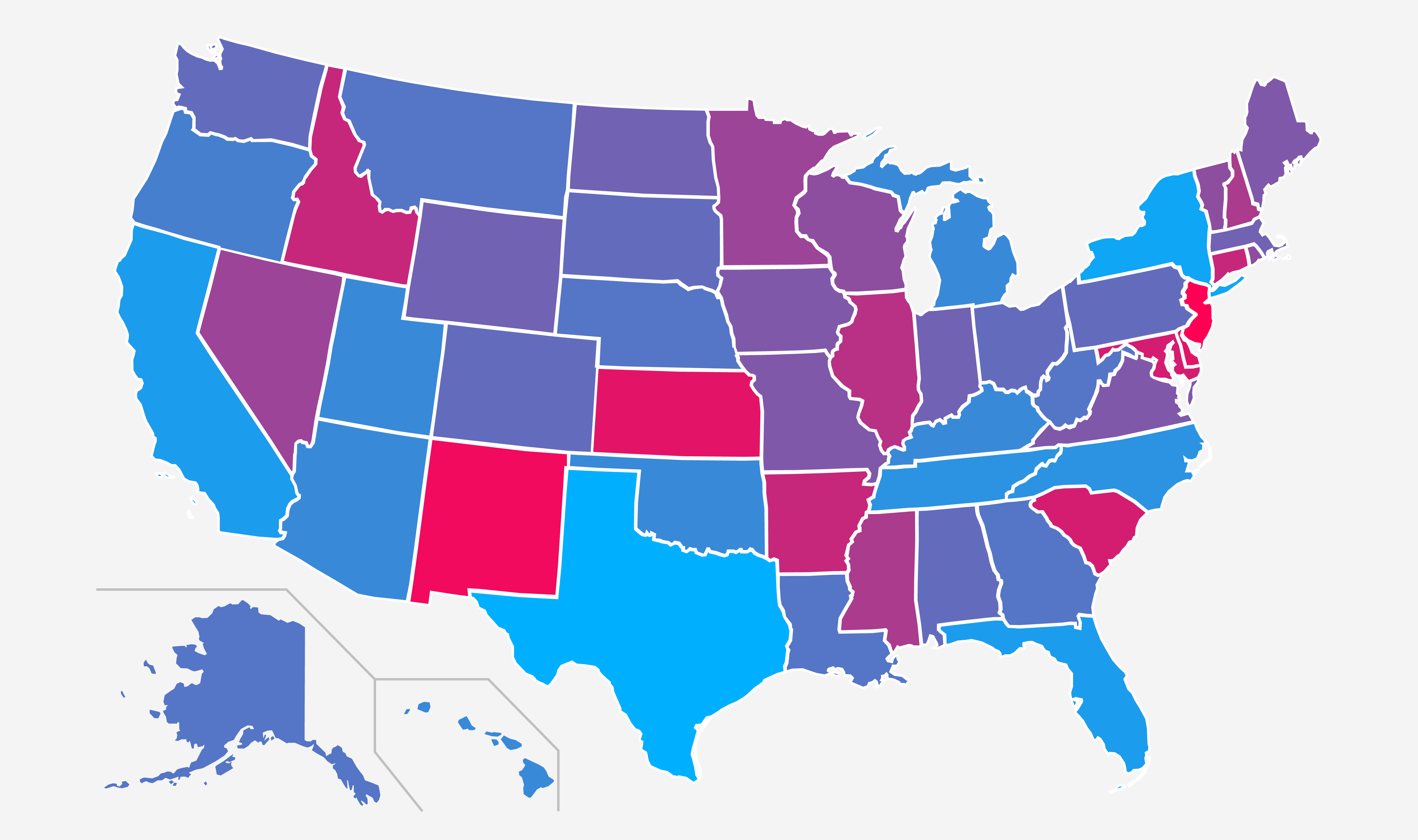 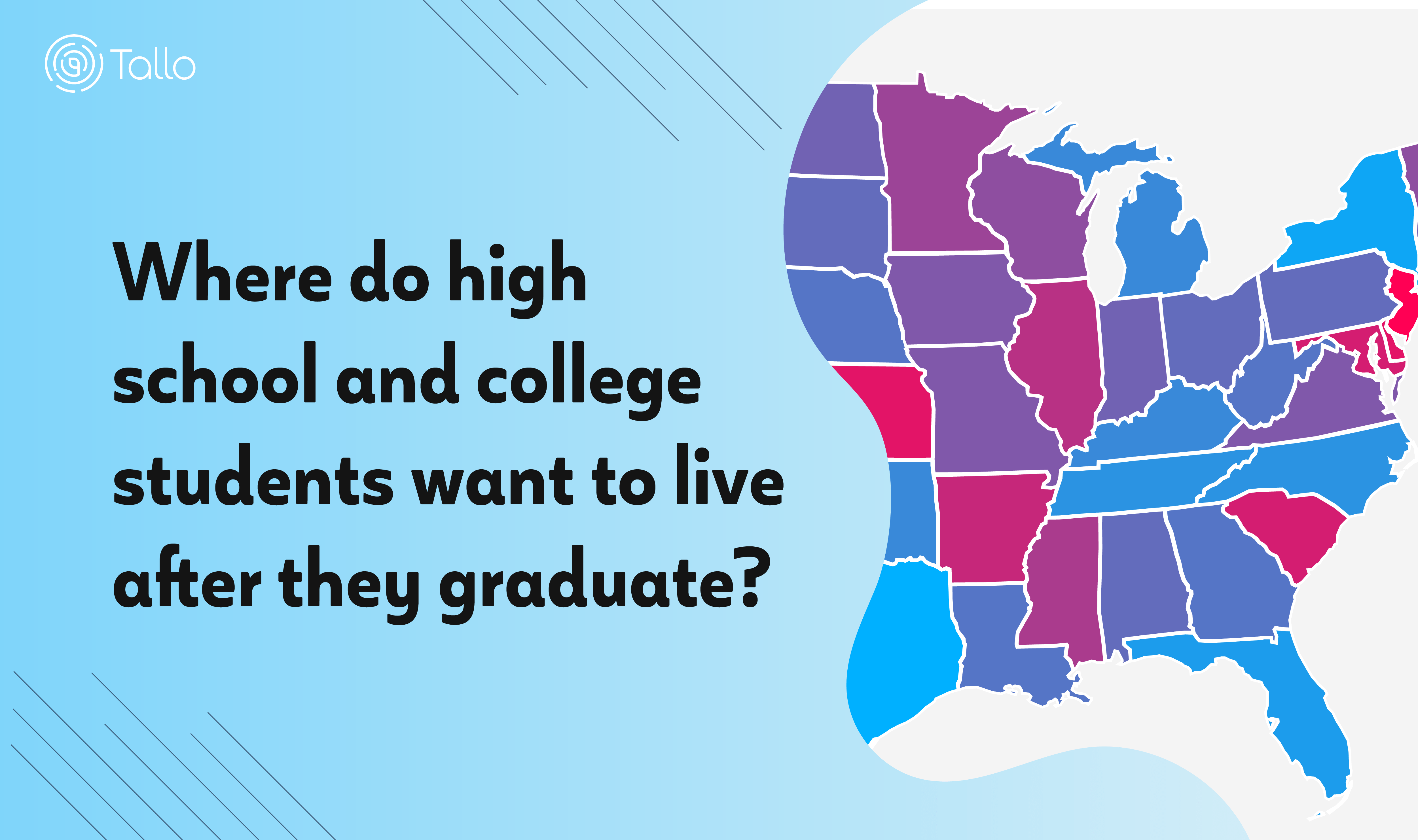 An analysis of over 630,000 students on the Tallo platform found that:

​​For decades, small, generally rural communities have faced the brain-drain problem. When there’s a lack of real or perceived opportunities in a region, the most gifted and most mobile young people tend to leave as soon as they can—taking their much-needed knowledge, skills, and abilities with them.

Larger metropolises, where opportunities tend to cluster, have usually faced this problem less. Because they host a critical mass of the most high-paying, desirable jobs, and big brand name companies, early talent has flocked to cities like New York, Los Angeles, and San Francisco whether they really want to live there or not.

But two developments are complicating this dynamic. First, the talent shortages that used to be a local problem have become a persistent nationwide issue. And with smaller and smaller generational cohorts coming through the pipeline, there’s no reason to think that’s going to get better—or even stabilize—any time soon. For instance, labor market research shows that Los Angeles, well-known for being a major magnet for young people, has seen its under 25 population shrink by nearly 750,000 people since 2001, which is a staggering 20% decline in young people in 20 years. Yes, the U.S. population is still growing, but that growth rate has slowed tremendously, and over the next couple of decades will start to move in the other direction. It is hard to fathom this in a nation that has always been known for its youthful culture and vigor.

Second, during the COVID-19 pandemic, we opened a door to remote work that companies may find difficult to close in the years to come. Everyone is desperate for talent, and more and more companies—even the ones based in traditional talent hubs—are offering jobs whose primary commutes are via Zoom and Slack. Taking a job in San Francisco doesn’t necessarily mean leaving Des Moines anymore. This has contributed to a new trend that stands in firm opposition to what happened during the Great Recession (2008-2010) when young talent migrated to a handful of the top metros. Just 10 years ago, places like Washington DC (remember the hoopla over Amazon’s HQ2 decision), New York, Seattle, and the Bay Area were where every college grad wanted to go, and smaller metros were feeling left out in the cold.

But times have changed. According to the latest data from the Census Bureau the South and Inland West are gaining people in droves. Across the West, states like Utah, Idaho, North Dakota, Nevada, Arizona, and Colorado are seeing dramatic increases of in-migration. In the South, Florida and South Carolina are seeing the same trends. Texas is also a big winner. When people can live and work where they wish, states and cities marginalized by events like the HQ2 decision should have renewed optimism.

But this will be true insofar as those places can attract and retain people in such a starved labor market. As labor shortages persist, it will be more and more important to not let valuable talent slip through the cracks. This is true both at the company level, where businesses must strive to keep employees, and also at the geographic level, where cities and states must work hard to not let valuable talent flee for the door.

Understanding where high school and college students want to move

If we apply this notion of stewarding valuable talent resources to the future of our economy, it means we must think about where early talent wants to live and work.

Here’s how it works. High school and college students joining the Tallo platform select the states that they have an interest in. Some people select several states, while others only select one. We normalized this data to get a better sense of where people want to be. The score is based on the geographic preferences of over 630,000 high school and college students. Seventy-seven percent of the people in this sample will enter the workforce over the next 3 years.

The Geographic Preference Score (GPS) is based on: 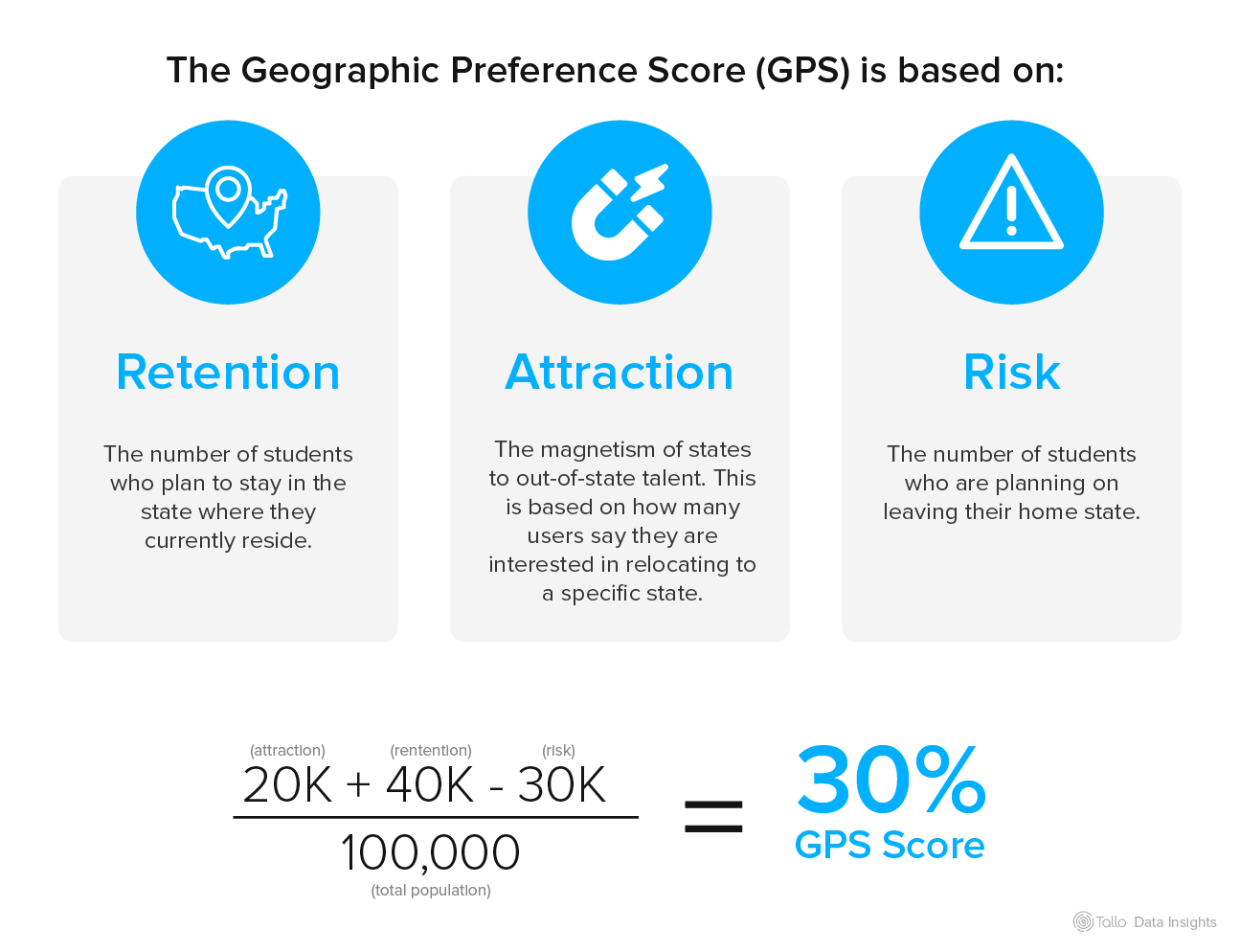 Let’s say that we have 100,000 users in a state. Since users can choose multiple states, we normalize the data by adjusting the counts of high school and college students planning to stay, leave, or move by volume of states selected. To keep it simple for our example, we’ll use round numbers and say these students haven’t selected multiple states. Let’s assume some 40,000 of the students in a state want to stay (retention) and another 30,000 want to leave (risk). Let’s also say that another 20,000 are interested in moving from other states (attraction).

To calculate the state’s overall geographic preference, we add attraction and retention, subtract risk and divide by the overall number of users in the state.

The score means that the state is poised to see a 30% increase in early talent growth and retention over the next three years.

One of the first things we discovered was that 72% of high school students do not plan on returning to their hometowns. This is understandable. The U.S. is a big country, and young people are, and have always been, eager to spread their wings, see the world, and find great new opportunities. But given how tight the labor market is, this number is something that local economic developers and other regional policy makers and hiring managers need to keep an eye on. If too many young people leave, the effect on local industry can be catastrophic.

On the flip side, some 61% of college students plan on staying put and finding a job close to where they attended college. Another 20% are undecided. As a result, an impressive 81% are either actively looking to stay or can be influenced to say “in economy”. And if they settle down and find stability, chances are that these former students will be there for the long-term. This is a massively important finding for college towns or cities with many colleges and universities. It also has implications for anyone interested or invested in people strategies and economic development. If your company is struggling, it might be time to locate in or closer to a college town.

Now, let’s get to the broader geographic preferences. 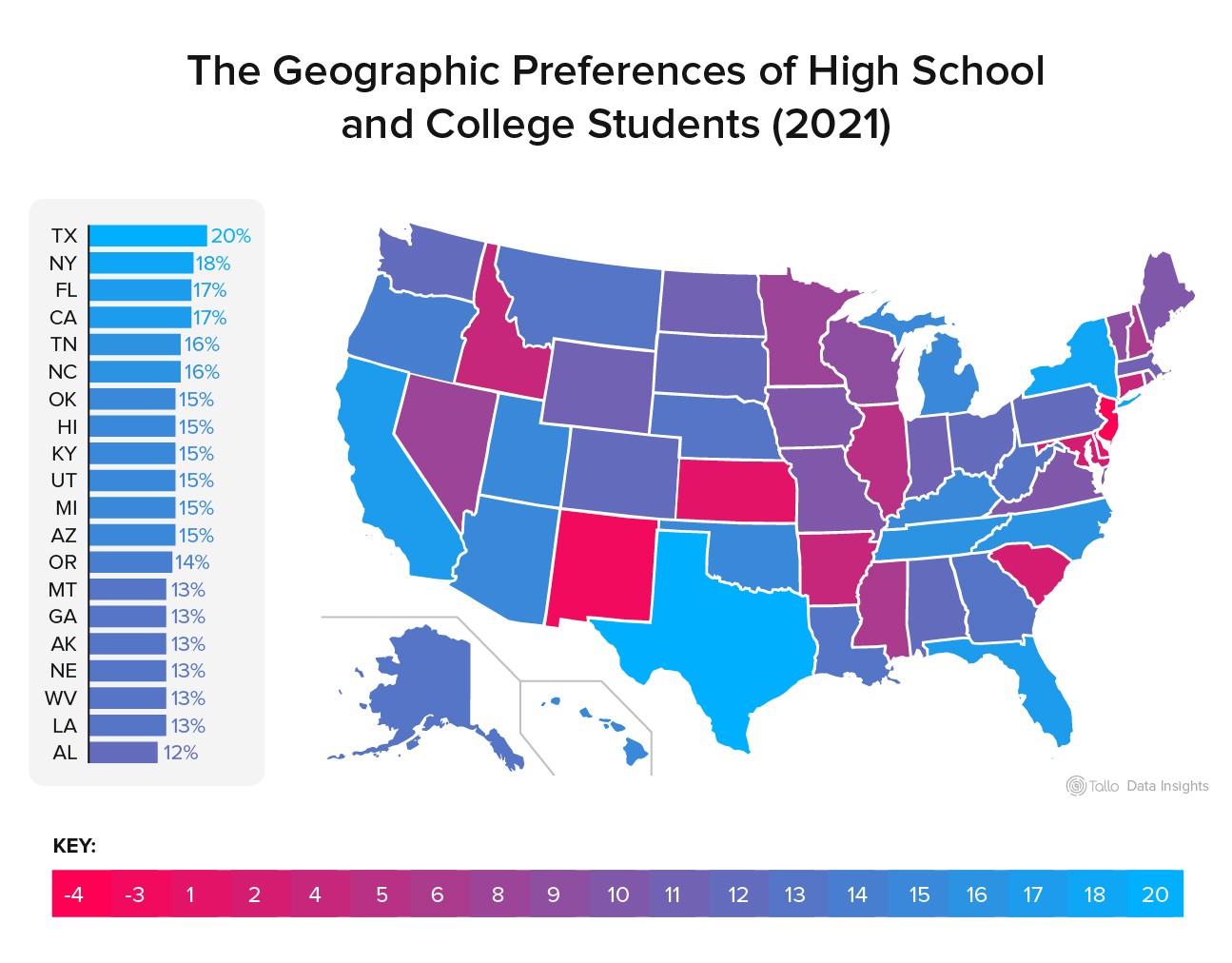 Overall, young people still have a proclivity toward America’s traditional talent magnets. Texas is currently the big winner for early talent. The state could see a 20% increase in Generation Z staying in or moving to the state over the next three years. This rapidly growing state with metro areas like Austin, San Antonio, Dallas, and Houston has increasing appeal from a variety of perspectives. Similar to Texas, Florida came in third at 17%. Florida boasts not only a warm climate, but a very high in-migration rate, and a wide variety of metros that offer burgeoning employment opportunities in a business-friendly environment. In a reversal of California’s trend, Florida is actually becoming a younger state. In fact, it is one of the few that boasts growth in the under 25 population.

New York (18%) and California (17%) took the second and fourth places respectively. Given the fact that New York and California are two of the top five states that people are leaving it is notable that they are still quite attractive to young people. The states are still home to the largest and most well-known cities in the US and should be able to win early talent. As we will see later, these places likely face some retention issues that need to be addressed.

Rounding out the top are Tennessee and North Carolina, both with a score of 16%. The top six states that appeal to young people could all see “early talent” growth and retention increase by at least 16% over the next three years.

Outside the top five ranking states, geographic preference gets even more interesting. Oklahoma (15%) Hawaii (15%) Kentucky (15%) and Utah (15%) make up the rest of the top ten list. The map of early talent’s geographic preferences is much more widely distributed, and much less densely urban, than the perennial trope about the dream of making it big in New York or LA would lead us to believe.

New Jersey (-4%) and New Mexico (-3%) are the two states with negative scores, meaning that over the next few years, they will likely face a reduction of high school and college age students staying in and/or moving to the respective states. Kansas and Delaware also had very low scores (each with a 1% score). This means they will likely have no real net gain in early talent unless new strategies to attract or retain talent are developed.

More students may be opting for smaller places

Before we get into the main observations, it would be good to note that given the short time-frame here, we wouldn’t necessarily put too much emphasis on these numbers as being indicative of long-term trends. That said, there is a potentially notable trend of growing geographic preference for smaller states. And this is somewhat corroborated by other initial research that has explored where Generation Z might want to live. 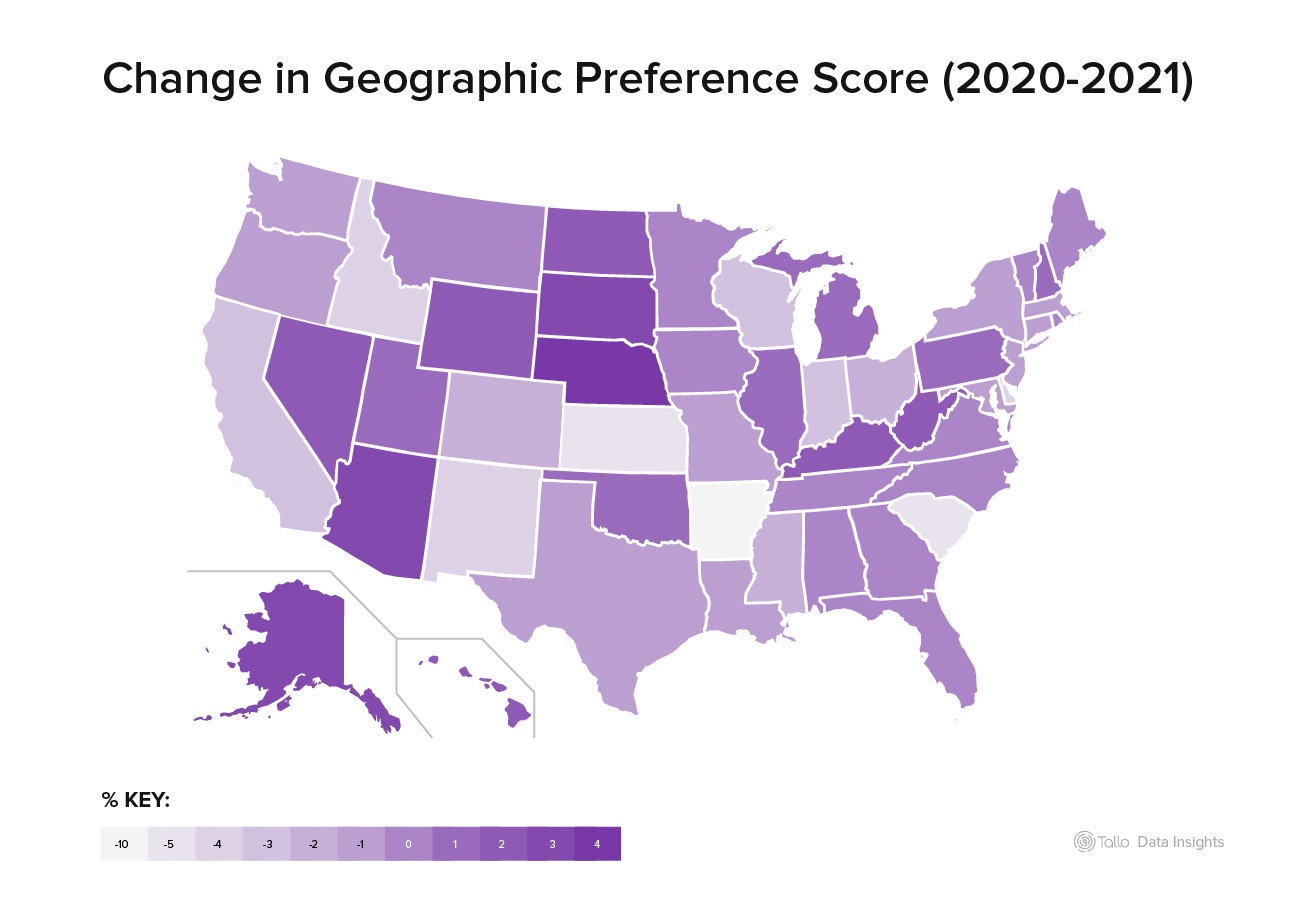 Nebraska grew by 4%, followed by South Dakota, Alaska, and Arizona, which all saw a 3% jump. Nebraska, South Dakota, and Alaska would all be surprises and it will be interesting to see if such trends hold for the next couple of years. Hawaii, North Dakota, West Virginia, Wyoming, Nevada, and Kentucky also showed good gains. Four of the six states here are also smaller (not dominated by major metro areas). Arkansas had the single biggest drop in Geographic Preference Score between 2020 and 2021, with a drop of nearly -10%.

It’s perhaps unsurprising to see the scores of sunny states like Arizona, Nevada, Hawaii increase. But the same can hardly be said of increasingly popular and overwhelmingly rural states like Alaska and Wyoming, or even mid-western states like Nebraska and South Dakota.

Whether it’s natural beauty and a yen for adventure, or for small towns and low cost of living, rural life (at least in certain states) might be growing more attractive to early talent. Part of this is probably due to the pandemic and accompanying restrictions, which removed many of the perks of dense urban areas while leaving the cost. It may also be due to perceptions that home ownership is more affordable outside these areas. After all, early talent is very aware of things like cost of living and debt (look for an upcoming survey from Tallo on this) and has watched millennials, many of whom began work during the great recession, become one of the latest generations on record to buy their first homes.

The overall Geographic Preference score gives a great picture of where early talent wants to be. And the change over time data helps us spot changes that could solidify into trends by the time the next wave of early talent enters the market.

For businesses struggling to build their pipelines outside traditional talent hubs, these findings should offer both reason to hope and a call to action. While remote work is an important driver of location decisions, early talent’s interest in working where they live shouldn’t be underestimated.

Remember, to think like a talent marketer. It’s not enough to connect with the current crop of talent: longer-term pipelines are critical to success. You need to be thinking about the next wave before the next wave has heard of you. For more on how to appeal to early talent, check out our playbook.

If you want to know more about your state, migration and workforce trends, reach out to us here.